This blog was written by Graham the brewer. Opinions are entirely his own.

When we first started investigating the origins of beer brewing, I was fortunate enough to have been making beer from the grain in the traditional* way for some 15 years. Brewing on a small scale of 5 to 10 gallons at a time, which would be about the volumes of some of the large Neolithic Grooved Ware buckets that Merryn had found in her research into the literature. So I thought this was quite a relevant experience. The processes for making beer can vary according to climate and equipment, but the fundamental biochemistries are invariant.

*) By traditional here I mean the European tradition, as from around the 18th Century, when brewing first became industrialised. The American tradition was interrupted by Prohibition, when malting and mashing was turned into making malt extract for the food industry. Malt extract is a late 19thC invention. It was marketed as a health supplement. When Prohibition was repealed American brewers mostly used extract, because it is a lot easier to make and to control extract brewing; their mashing arts were largely lost. Many American home brewers use extract or "brew in a bag" or a mixture. Americans would call what we do "conventional all grain brewing" see "brew in a bag" explained.

I had made enough beer and enough mistakes to have a good idea of what works, and what doesn't. So when I read the Archaeological/Anthropological literature on beer brewing that Merryn had gathered I realised that it was useless. It was largely anecdotal, confused and confusing, for it was written by academics who had never made a beer, and their source material was also from academics who had not made beer, they kept repeating the same old myths. They are considered to be experts in this field, but none of them had ever made a beer. How can one be an expert when one has no experience?

A lot of the archaeological literature on beer brewing is completely wrong. There seems to be an unshakeable idea that somehow there was some sort of primitive or primordial beer that had been discovered when a loaf of bread fell into a bucket of water, or grain in a pot was rained upon, and they then spontaneously turned into some sort of beer. It was a primitive beer, but it was steadily refined into the modern product.

I knew that this was utter nonsense for making beer requires a three stage process:

All three stages require completely different conditions, so there is no way that any two or even all three could be conflated, they have to be separate.

So I set out to see if I could make this beer-bread or Bappir that both the Egyptians and the Sumerians had used.

I could see that there was no point in baking a yeasted loaf of dough or even malt in a conventional oven, and then expect to make sugars from it. The heat would kill the yeast and any enzymes long before the bread had conventionally baked. Bappir could not be anything like bread as we know it. The naive academic assumption is that anything baked in an oven must be bread, just as there is an assumption that all querns were for grinding grain into flour to make bread.

However, I thought that if crushed malt was mixed with water into a very thick mash, and if this was placed in a very low oven, there was a chance that the mash would pass through the band of temperatures necessary for conversion and hopefully stay within that band for long enough to effect a conversion.

We had an old 1960s very heavy gas cooker that had been converted from town gas (pyrolised coal) to natural gas (methane). It had an oven with the lowest setting , gas mark 1/4. It was very much like this illustration below.

Two metal cup-cake trays were filled with a stiff mash of crushed pale malt and cold water and were put on the bottom of the oven late one evening and left overnight. 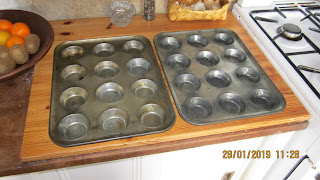 As we went to bed we were encouraged by the aroma of a mash that was just beginning. In the morning the kitchen was filled with a rich beautiful aroma and the contents of the trays was a deep brown, crispy, crusted and almost dry. I now know that what had happened was that the mashing had at least partially succeeded, and then as the temperature had increased, the Maillard reaction had created the delicious aroma and flavours. The product was baked so hard onto the trays that the only way to remove it was to add hot water to transfer it to the pan. Malt sugars are incredibly sticky and make a very powerful glue.

Unfortunately there was not enough to make a beer with, but it demonstrated a proof of concept. This was in 1997 and the only digital camera I could borrow was of very low resolution. I didn't take any pictures of the cup cake trays.

Recently I was trawling through the pictures of Merryn's thesis and I found a picture of the oven mash in bowls, the two on the right. The one on the left is unmashed crushed pale malt.


We took a bowl of this mash to a presentation that Merryn gave to the Manchester University Archaeology Society in 1997. Those people who were prepared to taste it thought it was sweet and delicious, a bit like granola. One person liked it so much he ate nearly half the bowl.

Below is the malt liquor that oozed out of the oven mash and was left in the bottom of the pan. I think you will agree there is not enough to make beer with, but if this oven mash was lautered and sparged there may be enough for a litre of wort.


This is why there is no substitute for actually doing these things, to get an understanding of what is actually happening. There is so much about the brewing processes that is experiential, the smell, the colour and so many little indicators to give an experienced person feedback as to what is happening and how to regulate it. One really has to do it, to get one's hands sticky, to really appreciate the saccharification. It is one of those clubs that one can only join by doing it.

This blog is about trying to recreate this experiment, only this time I would measure, record and take pictures. I have the benefit of much more experience, knowledge and understanding. Enough for me to realise how little I really know, and how much more there is to know.

I also have the benefit of Lars Marius Garshol's research into traditional Farmhouse brewing. It is an excellent ethnographic study of North European traditional brewing, often using equipment and techniques dating back to at least the Iron Age, e.g. wooden barrels, buckets and other wooden vessels. One needs iron tools to make staves easily.

Here is his blog on Keptinis :  Traditional oven mashing.
And here is a youtube          :  Keptinis Alus


The experiment.
Our new cooker is also gas (bottled propane), but smaller and of a much lighter construction. It would not take two cup-cake trays on one level. It also has a different control for the oven, no 1/4 only a very low S, which I take to mean Standby or pilot. As I wanted to try making a beer with this batch I decided to use one cup-cake tray and two aluminium food trays. I chose a silicone tray in the hope that if the cakes set solid, they would be easier to remove. However as I discovered the sugars will stubbornly stick to anything! 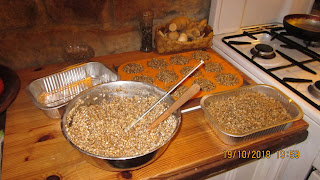 I made a stiff mix of water and crushed pale malt at 60C. This was probably a mistake, it should have been 20C. Then I found a shelf that gave a steady 70C, about half-way up the oven for the cup-cake, and put the two deeper trays on next shelf up and left it for two hours. After that I moved them to the top of the oven and turned the heat up slightly and left it for a further two hours. I wasn't prepared to leave it on overnight, because I didn't know how much gas was left in the bottle. 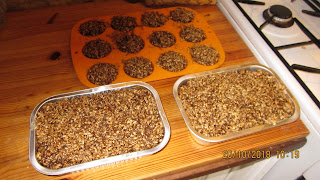 There was not much darkening, so it had obviously not got hot enough to cause much of a Maillard reaction. Again a mistake it should have been much hotter. 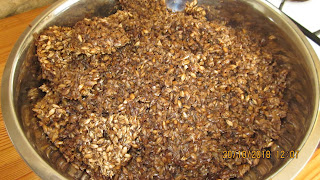 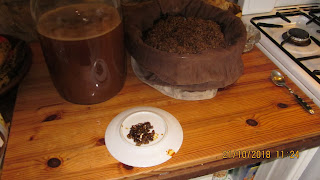 About six pints were recovered, enough for fermentation. An iodine starch test showed that it was not a complete conversion, but there was enough sugars for a 4 day ferment. Then I added dried meadowsweet flowers as a preservative, too many I think. 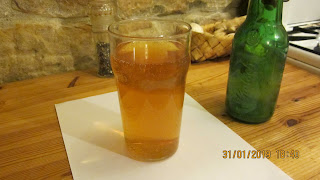 The finished product, quite light, maybe 3% and far too much meadowsweet, so much so that is no discernable malt flavour, but it is still drinkable and alcoholic.

I need to do an awful lot more work on this until I can reliably repeat oven mashing.

Yes it is possible to successfully mash in an oven, but it requires a very low temperature, much lower than needed for a Maillard conditioning, which again needs a very much higher temperature. The two are exclusive.

So were the Egyptians mashing with their beer bread, or were they conditioning an already converted mash? We may never know, but certainly Heirakonpolis has six large and very fine mash tuns, and also the Egyptian texts describe many different beers, of a variety of colours and darknesses.

So on balance I think that beer bread was just a way of conditioning an already converted mash, to give it colour and flavour.

We were just very lucky that our old cooker in Manchester had such a thermal inertia that it could spontaneously both mash and condition.
Posted by Graham Dineley at 12:00 pm