What is Wort - a brewer's perspective

Hope you had a grand Yule and that you enjoyed the midwinter celebrations. We wish you all the best and A Happy New Year for 2015. There has been a bit of a lull on ancient ale blogging in the last couple of months, however we aim to correct this in the New Year and get back to writing again.

This one is about the Wort. Graham wrote it several months ago. It would make a good response to a short article "Beverage with heritage" that we read over the holidays. It was published in the Christmas and New Year Edition of New Scientist magazine, the 'one minute interview' with Patrick McGovern, director of the Biomolecular Archaeology Project for Cuisine, Fermented Beverages and Health at the University of Pennsylvania Museum. The question is asked: how does ancient booze compare with the modern stuff? The answer includes that "they wanted to be sure they had enough sugar to get the fermentation going, so they took whatever they had that contained sugar and mixed them together."
.
This idea of 'mushing loads of random sweet stuff together to make alcohol in prehistory' seems to be a commonly held view amongst non brewers. Merryn wrote a blog about desperately seeking sugars a few months ago, which tried to address the issue and dispel this myth.

Here is Graham's perspective, a beer brewer's explanation of what wort is:


Wort (pronounced wirt, not wart ) is the Juice of the Barley, well not quite, but almost very nearly so. It is a thin, runny, very sweet but very sticky liquid, straw coloured through to brown. It is effectively a thin synthetic honey substitute. Ale made from wort without preservatives or flavouring actually tastes a lot like mead made from honey.

Wort is the liquid sugars extracted from malt, that is to say, partially germinated cereal grains - barley, wheat of all varieties, oats and even millet, but not rice or maize. It is the primary source of fermentable sugars in making ale or beer and always has been. It is relatively easy to make a sugar solution of at least 10% from malt, and then to wash further sugars from the grain down to a realistic level of 1-2%,  "small beer" level and, of course, anywhere in-between. This compares very favourably with other natural sources of sugar like birch sap, which is between 0.5 and 2% sugar, which would only make a small beer. So adding birch sap to a brew would only dilute it, not strengthen it as some scholars claim.

Wort is made by "hijacking" some of the natural processes of the grain's life cycle.

As part of the growing process the germinating grain must convert it's energy store, starch, into sugars so that these can then be built into cellulose, the structural skeleton of the roots and shoots. This requires the liberation of the two amylitic enzymes, alpha and beta, which are little like ptyalase, the enzyme in saliva that converts starches into sugars.

If this growing (germination) process is halted when the most enzymes are present and little of the growing structure has started, it will be good malt.

So, to make wort you lightly crush the malt and mix it with hot water at about 65 degrees Centigrade. Keep it at this temperature for anywhere between half hour to about 2 hours, depending on your style. This is called mashing. Then you drain the clear liquid sugars from this mash by lautering, which is yet another story. This gives you a strong wort. Then you can wash further sugars from this mash, sparging, to get a weaker wort.

Brewers measure the potential sugar and therefore alcohol of a wort using "specific gravity". Water is 1000. David Line in his book "The Big Book of Brewing" explains this in great detail in chapter 18.

This was my "Bible" when when I first began brewing beer 32 years ago. David Line was a pioneer in his time, explaining what the processes were, how they were done and why. He also explains different methods of mashing using simple equipment and this has been very valuable to me in re-creating the ancient and traditional crafts of brewing ale.

So to recap: wort is a golden brown, very sweet, very sticky, runny liquid that contains most of the potential sugars from the malt. It can be made to a variety of strengths e.g. Arctic Ale.

To illustrate this I will give you the results of one of my recent brews.

The recipe is loosely based on David Line's "Brewing Beers Like Those You Buy" page 88, Gales HSB. One of my favourite beers, sadly no longer made. I found his book to be an excellent collection of recipes for good Ales and Beers that could be bought in the late 1970s and 80s. Large brewery's methods have changed since then and sadly many of the modern renditions taste nothing like they used to.

The mash tun was unplugged and covered with a sleeping bag to maintain the mash temperature. It was left like this for 2 hours.

This was followed by sparging. The first gallon of wort was 1062OG, the second 1048OG, and these, together with the 3.5 gallons, were boiled in an Buffalo 40 litre boiler with 1lb of dark soft brown sugar, and 4oz of molasses (these are the in the recipe and I think the molasses adds a certain something to the flavour) for one and a half hours. This produced 5 gallons of 1084OG. This was fermented in two fermenters.


A further 5 gallons of wort were sparged of 1036OG, 1020OG, 1012OG, 1006OG (this was very pale and weak) and finally 1014OG left to drain overnight. This was again boiled on the old hops, because there is an awful lot of sugars left on the hops. This gave 5 gallons of 1024OG, which was added to the two fermenters. At the end of primary fermentation this gave 10 gallons of 1008 final gravity.

This was quite a surprise to me, for I haven't been measuring the gravities for some time, and I never expected to get this much beer from 15.5lbs of malt.

A recent comparison with a commercial beer, Scapa Special 4.6%, suggests that my beer was no stronger, so maybe there is something wrong with my figures.

But it did make me think that I may be over-sparging my wort and that this could be contributing to the haze, and tannin like bitterness. So I have increased the malt to 17lb 8oz, and now I am getting a much nicer beer.

For those of you who will never meet malt, or a mash tun there is an alternative. Go to a whole food shop and buy one of these. 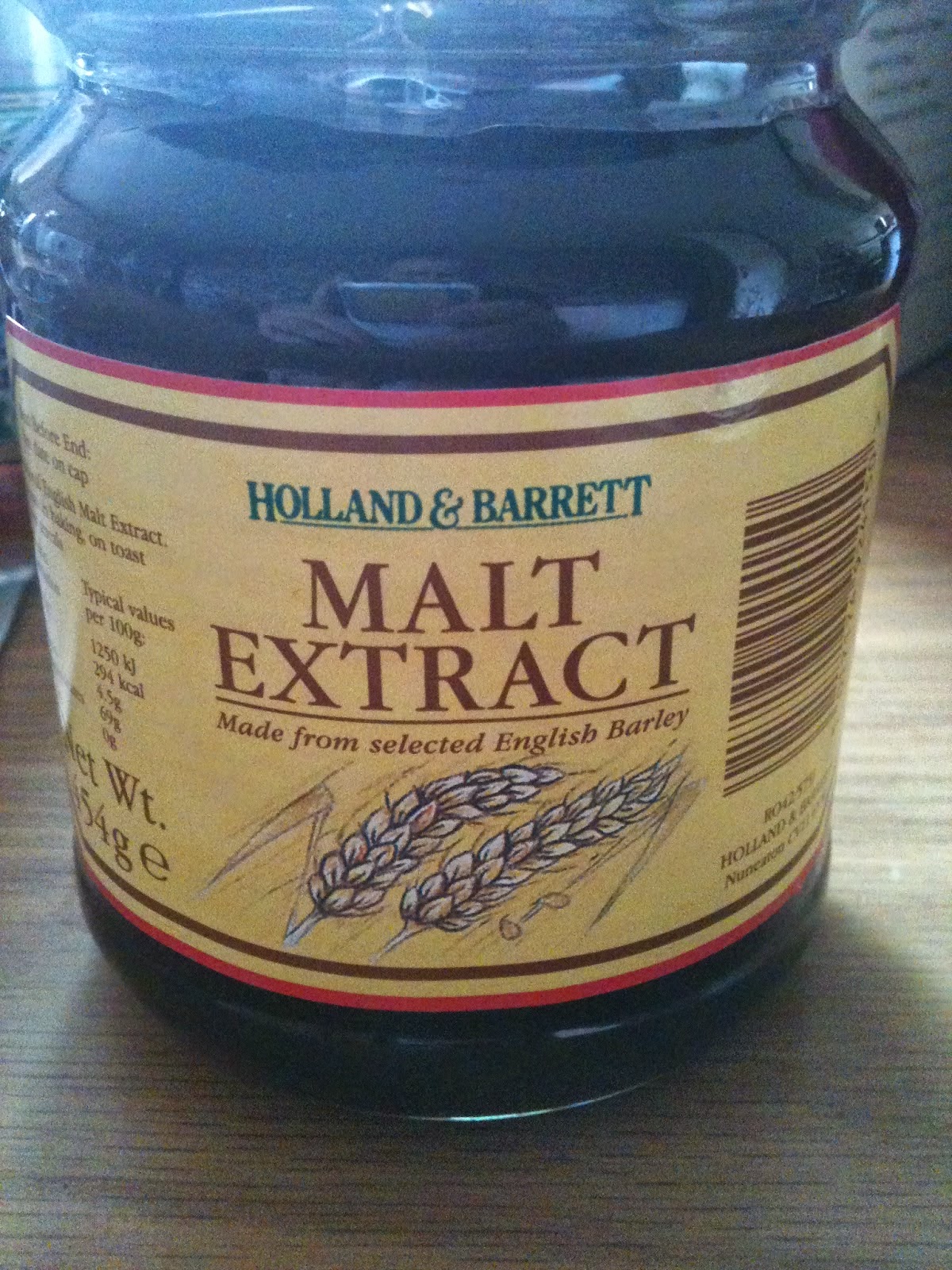 As best as I can estimate, this jar contains 11 fl oz of malt extract weighing 16oz, so this makes a density, specific gravity, or OG of 1450 or so. Dilute this with 4 imperial pints of water and you will have a re-hydrated wort of about OG1054.

Wort is a brown, runny, very sweet liquid that is extremely sticky when it dries. It could be described as a kind of dilute synthetic honey, that is very ancient in origin and is possibly the first process that was ever made with cereals. It could be that cereals were first cultivated, not for their staple qualities e.g. flour, gruel or bread, but instead for their status potential, sugars.

Many of the early settlements in the Fertile Crescent had special buildings with smooth floors, made of beaten earth, clay or lime plaster which are ideal as malting floors. All that is then required are containers within which to heat the crushed malt and water (the mash) to make a sweet wort. Merryn's M. Phil, entitled Barley Malt & Ale in the Neolithic (1999), looks at this, and the archaeological evidence for it, in some detail. One particular site, Beidha, was excavated in the late 1950s by Diana Kirkbride, a member of Robert Braidwood's team. She describes a smooth plaster floor with 'thousands of grain impressions'. This is probably a malting floor. The site is dated to the 8th millennium BC.

There is a Biblical expression: "The land flowing with milk and honey". Some Biblical scholars have made tortuous explanations to explain this phrase - they write about how wild bees' nests in cracks in the rocks would ooze honey in the hot sun. More informed scholars explain that this phrase refers not to bee honey, but rather to some kind of artificial sweetness, perhaps made from figs or dates, or maybe even made from grapes.

This must be because these scholars do not recognise nor do they understand that cereals can be a source of sweetness, if processed correctly.

I think that this phrase 'land of milk and honey' refers to milk and wort. It is a metaphor, or a description of a land that is good for both cows and for growing grain.

It seems that Biblical scholars have overlooked the fact that wort (liquid sugars made from the grain) was once commonplace in Egypt and Sumeria, otherwise they would not have been able to make beer. This was probably common throughout the whole Fertile Crescent and the Biblical Israel.

With the rise of Islam in this area, alcohol has been proscribed. There is no further use for malt or wort, so the practices and knowledge of malting and mashing have died out completely there. Archaeobotanists and archaeologists who have done field work on cereals in Turkey and the Ancient Near East seem to be unaware of the malting, the mashing and the wort. It is outside their experience and so it is understandable that wort has been overlooked in archaeological interpretation.

Today Bouza is made, it can be described as a type of beer, however it is a wheat based beverage made by lactic fermention. It is no longer alcoholic.

So, why do I bother to go to all the trouble of mashing, lautering, sparging, boiling and all that washing of brewing equipment? After all, it takes a whole day, a huge amount of effort. The answer is that all of the Beer Kits that I have ever used produce a beer with a kind of metallic flavour. The Kit contains a large can of Malt Extract. No amount of boiling with extra hops, or anything else will make it taste any better.

I make my beer with the simple, basic ingredients. I use traditional techniques to make the wort because I think it makes a better tasting beer. At least, when everything goes to plan, it tastes good. Even when it's bad it is often not much worse than some of the bad commercial beer available in supermarkets.

Beer is changing, with the way it is made. Some commercial beers, in cans, bottles and on draught have this unpleasant metallic flavour. They have been made from malt extract.

I was disturbed recently by looking carefully at the contents lists of commercial beers. Some like Scapa Special say that they are made from "maris otter pale ale malt", or others "a blend of pale and roasted malts". I know these are made "from the grain" and not with malt extract.

Some lagers and stouts are labeled as containing barley, wheat and oats, with no mention at all of the malt.  I can't help but wonder if they have been made from syrups, much like the high fructose corn syrup so popular in the processed food industry. This could explain the uniform blandness of some of these cheaper beers.