Making your own beer at home is becoming a popular hobby. On the internet there are thousands of videos, web pages and blogs about beer and how to make beer. They vary from the basic through to complex, jargon filled technical descriptions. There are some funny ones too. And quite a lot of strange stuff. If you are interested, just search for a few choice phrases around the basic question of 'how to make home brewed beer' and you will find plenty to choose from. I have put a couple of my favourite web sites and books at the end of this blog.

It can be confusing, with extract brewing, extract brewing (with grain) and all-grain brewing, not to mention the many different styles of beer and ale that can be made. Home brewers often tend to have their own, sometimes idiosyncratic ways of beer brewing. However, it is all based upon the same basic principle - that grain can be easily converted into ale by the processes of malting, mashing and fermentation. Maltsters and brewers have been doing this for thousands of years.

I aim to demystify the whole beer brewing process through this blog, and also to share some of our adventures with making ancient style ales.

Here is our Juniper Yule Ale, just as it is beginning to ferment. We had made 6 gallons of wort and the big plastic fermentation bucket was very full. When the ferment took off it was so vigorous that there was not enough headroom in the fermenter. So we siphoned a gallon of wort into this demijohn and put an airlock on when it settled down. No sugar was added to this wort - it all came from the crushed malt in the mash tun.


There are two main ways to make beer at home. Use a brewing kit with malt extract, or go for the all grain brew. We don't use malt extract, although it is possible to make really good beer with it. We just prefer the flavour of all grain ale, and think that it is well worth the extra effort of making your own wort, then fermenting it. Traditional ingredients and techniques provide authentic flavours for ancient ales.

Crushed malt is the traditional ingredient for ale and beer. Any grain can be malted - wheat, barley, oats, millet and rye. Today, a bewildering variety of malts are available to the brewer and for every brew there is a grain bill. Also known as the 'mash ingredients' or the 'mash bill' by some brewers, it is the particular and specific mixture of crushed malts in the mash tun that create the colour, flavour and body of the resulting ale. The grain bill depends what you are brewing - bitter, porter, pale ale or stout for example.

For our juniper ale, we mashed 15 pounds of pale crushed malt as the base malt, together with eight ounces of crystal malt and eight ounces of roasted barley for colour and flavour. From this, we got 6 gallons of wort that was boiled with a few hops and a couple of ounces of crushed juniper berries and then fermented into ale. 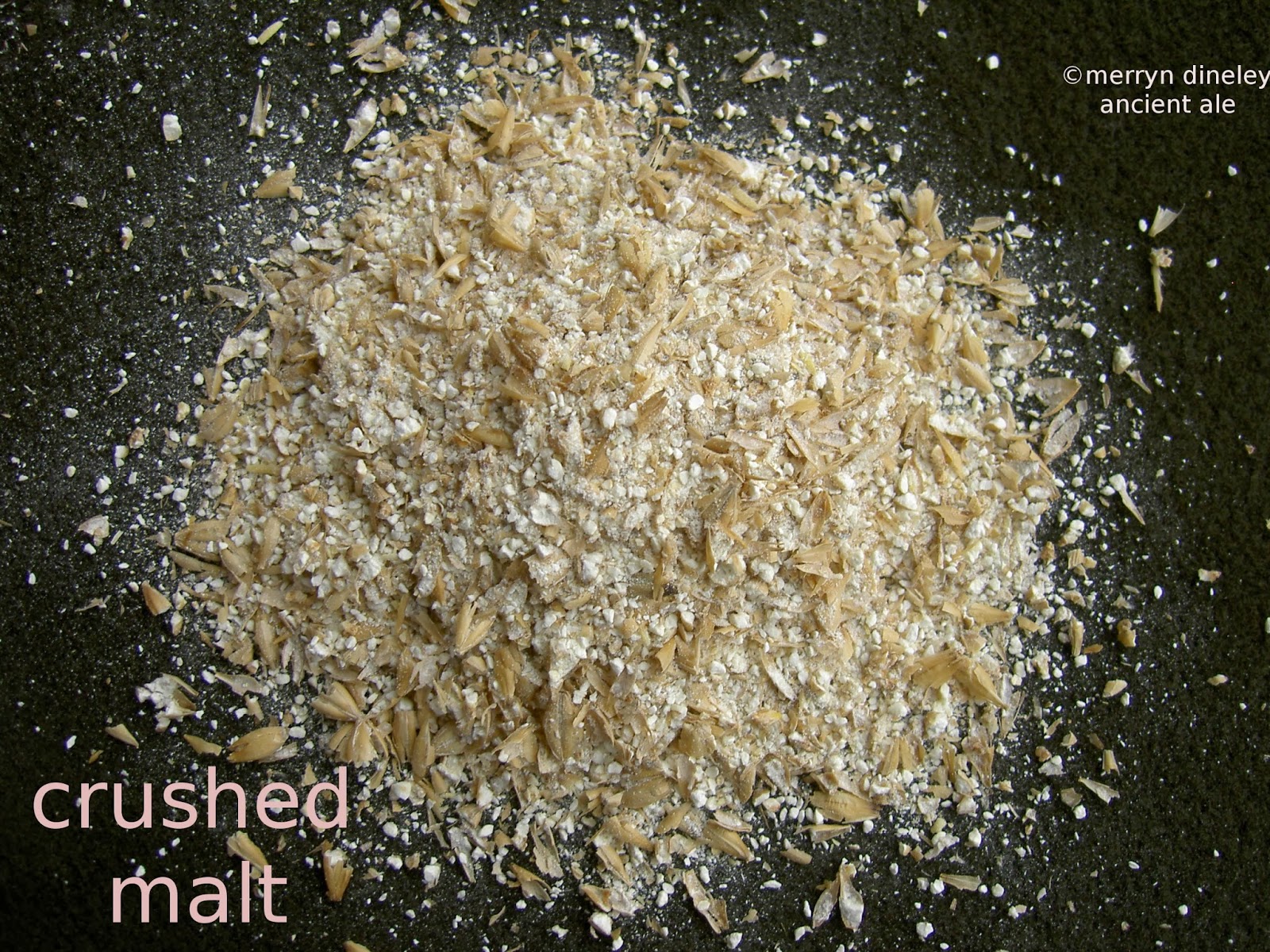 It is important to crush the malt before putting it into the mash tun because this mixes up the grain starch with the enzymes that were activated during the malting process. Those breweries who use malt tend to buy their malt as whole grains, because it stores better, then they crush it in a grain mill before mashing. Crushed malt is also known as 'grist' and the photo shows some of the pale crushed malt that we use. You can see the grain husks.

Malt extract is thick and sweet, like syrup. It is widely used in the food processing industry. You probably eat some most days, since it can be found in cereals, sweets, ice cream, cakes and many other processed foods.


Today many home brewers and some of the big brewing companies use concentrated malt extract to make their ale and beer. There is no need for a mash tun. All you need are boilers and fermentation vessels. The mashing has been done for you, in the factory. Grain processing companies mash huge amounts of crushed malt, extract the wort and then concentrate it, by boiling it in a partial vacuum, to keep the temperature down.

It is a food processing technique that was patented in the 1860s and was first used to make condensed milk. It was not long before the vacuum extraction method was used to make wort concentrate and it is now a powerful industry, with factories all over the world. Over the past ten to fifteen years, the number of breweries using malt extract instead of malt has increased. Given that it is concentrated wort and that it has been made on an industrial scale using equipment, techniques and technologies that have only been available since the late 19th Century, it is debatable whether or not malt extract is a suitable ingredient if you want to re create an authentic ancient ale. In Brew Your Own magazine, May/June 2008, there is a detailed description of how to make malt extract. A shorter description can be found here

I was looking for a video that would show how extract brewing works. There are hundreds, if not thousands of them. I chose this one. In September 2012, the news story broke that President Obama wanted beer to be brewed in the White House. They chose the malt extract method. The recipe included a small amount of specialist malts for flavour, but the main ingredients were liquid malt extract and dried malt extract, with some special White House honey and pelleted hops. This seems to be the way that many people make beer at home. But not everyone.

There are a lot of home brewers who still use malted grain. There are even some who make the malt themselves and crush it before putting it into their mash tun. There are others who want to make ales using traditional gruit herbs instead of hops, which were introduced in medieval times ... but more of gruit ales and traditional floor malting later. That is another story. For now, I just wanted to write a little about the difference between extract brewing and all grain brewing. And I think I have done that.

... our favourite brewing book is The Big Book of Brewing by David Line.
First published in the 1970s, it is still in print. Excellent explanations of how to mash at home and it has very good, clear instructions and recipes. He wrote another book Brewing Beers Like Those You Buy. Also an excellent set of recipes for all grain brewing. I am not sure that all of the breweries that made those beers and ales still exist. The brewing industry has changed a lot since then.

... our favourite brewing history book is Beer: The Story of the Pint by Martyn Cornell.
This book covers the prehistory and the history of beer brewing. I think it is out of print but available secondhand, or from your local library. Another fascinating read by the same author is Amber Gold and Black, a history of beer styles. Available from here: zythophile

This is a very detailed site that explains everything you might want ever to know about making malt, ale and beer: http://www.howtobrew.com

Here is a site that discusses the 'extract or grain' debate:
http://www.maltproducts.com/news.malt.extract.html
Posted by Merryn Dineley at 3:36 pm