In the summer of 1997, before Graham did his oven mashing work in the autumn, I'd been doing some hearth mashing experiments in the back garden. I wanted to see whether I could make malt sugars using basic equipment and facilities, something similar to that used by people in the neolithic era: an open fire and pots. I did some baking on a stone beside the fire as well. I used pale crushed malt from Fawcett's. It was simple, straightforward stuff.

Graham was dubious that it would work. He reckoned it might not be easy to meet the narrow specific temperature band, between 62 and 70 degrees Centigrade for the successful enzymatic reduction for the saccharification. But I thought I'd have a go anyway.

Replica neolithic pots were not easily available then. However the local garden centre had some suitable unglazed earthenware pots, so we bought and used them. The bowls were porous and, given they were to be used for liquids, they had to be sealed. We sealed some with beeswax, others with lard or butter. But this is another story - fats in prehistoric pots and what they might or might not represent. It's complicated.

The first hearth
Using stones from the garden, I made a small hearth and lit a fire. I went for the classic camp fire style, a round hearth. In one of the bowls I mixed some crushed malt with cold water, as below, and started to heat it in the hot embers. I had some cold water ready to cool it down, should it become too hot.


After about half an hour, the mixture was beginning to smell like one of Graham's mashes. There was that familiar sweet, delicious, malty aroma. The mash slowly began to change colour, becoming darker brown. It tasted sweet.

Although the conversion from starch into sugars was working, albeit slowly and not very efficiently, I found it difficult to control the temperature in such a small hearth. The embers were cooling too quickly. The mash was getting cold. The hearth was far too small to be a working hearth. I never needed to use that cold water.

I tried adding wood to the fire. This didn't work. The wood produced flames but not sufficient radiant heat. I moved a hot stone next to the pot, that didn't work either. Quite clearly, a lot more practice using an open fire was required.

I needed a bigger hearth. More of that later.

Making sweet barley cakes, malty biscuits: bappir
By now the large flat stone was hot to the touch. So I decided to use it for a kind of baking or mashing experiment. I had no idea what would happen. I'd never done anything like this before.


Crushed malt was mixed with cold water to make a thicker mixture than I had made for the bowl mash. A few little 'cakes' or 'biscuits' were gently warmed up on the hot flat stone. It was not a fierce heat. Provided that we kept splashing them with water, they too began to turn a nice golden brown colour. Water is necessary for the enzymatic reduction, both as a physical transport and as a chemical component in the hydrolysis.

After about half an hour, the malted barley biscuits began to taste sweet. This is a simple demonstration that sugars can be made from malted grain with no need for a container. I'm not sure what to call them; they are not like modern cakes or biscuits. Perhaps the best description is the Sumerian word bappir, which seems to have been a kind of beer bread.

There was no honey, dates or yeast in my bappir. The only ingredients were crushed malt and water. All of the malty sweetness came from the malted barley, by the process of the enzymatic reduction of starch into malt sugars. 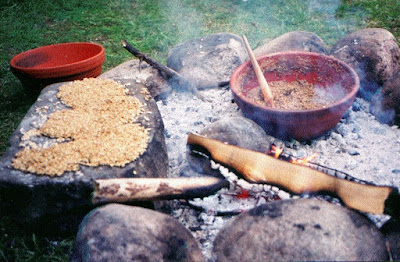 The second hearth
I mentioned earlier that I needed a bigger hearth. So I built one, based upon the large rectangular hearths that we had seen at the neolithic village of Skara Brae, Orkney. It was so much easier to use than the small round hearth. I could have a fire running at one end, then rake the hot embers to surround the bowl that I was mashing in. The temperature of the mash was a lot easier to sustain for the necessary hour or so for the conversion from starch to malt sugars.


I could see, smell and taste the saccharification in my mini mash tun. Today experimental archaeologists talk about the experiential and the experimental aspects of what they do and what they try to re-create. In this simple hearth mashing experiment I was experiencing the aromas, the taste and the effectiveness of this simple technique.

I successfully made malt sugars from malted grain and hope that there is enough information for this fundamental experiment to be repeated by others. If not, then please get in touch and ask me about it.

Doing a demonstration, no longer an experiment
These simple hearth mashes and making sweet bappir from crushed malted barley and water formed a part of my M.Phil thesis 'Barley Malt and Ale in the Neolithic' which was completed in 1999 and published (by invitation) as a BAR in 2004. The experiments were repeated several times. Every time the crushed malt and water became sweet and the saccharification worked. Eventually, what had started as an experiment in my back garden became a demonstration.

In the spring of 2009 I was invited by EXARC to the Eindhoven Open Air Museum to take part in a beer brewing workshop. I arrived with nothing. I had no malt and no pots. I wasn't sure what I was going to do.

Thankfully, the medieval brewers had plenty of crushed malted barley for their demonstration and they were happy to give me some. The museum potter, Flor Buchuk Gil, had some fine pots and she was happy for me to choose and use one of hers. For the mashing in demonstration I selected a beautifully made wide earthenware bowl that had been burnished to make it watertight.


The hearth was large and round, so there was plenty of space to burn wood and use the hot embers from that to heat the bowl mash. The conversion was excellent. The initial saccharification occurred within the first hour of mashing. I was busy talking to visitors, explaining the process and what was happening. In that time I neglected to stir the mash. It became caramelised and ended up being incredibly tasty and sweet.

Some small flat stones were found. They were used to make some sweet bappir, as I had done in the back garden. Once again, the saccharification worked very well indeed. Visitors tasted the mash from the bowl and declared it to be delicious. I noticed that, at the end of the day, most of the sweet bappir or malt flatbreads had been eaten.

Making malt sugars from crushed malt requires water, but it does not require a container for that water. Malt flat-breads (aka sweet bappir) can be made on a hot stone beside a fire with nothing other than malt, stone, water and fire. This technology, or alchemy, was available to the first seed gatherers of the ancient Near East. All they needed was the knowledge and experience of malting the gathered cereal grains.

Professor Li Liu and her team at Stanford University have recently identified morphological changes in starch granules that are consistent with malting. These date from 13,000 years ago. See here for more details.

This technology could be many tens of thousands of years old, beginning with the first seed gatherers. These malt flat-breads are so attractive and tasty that people eat them. They would have been more attractive than un-malted flat-breads. Once this trick with cereal grains was discovered it would not be lost. Today we probably eat some malt every day. It's added to breakfast cereals and confectionery to make them more attractive.

Posted by Merryn Dineley at 4:42 pm