The first malting floor that I ever saw was about 200 years old and made of local clay. It was at the Corrigall Farm Museum on Orkney, a late 19th Century farm with two fine stone built barns, one for the animals and the other for processing and storing the grain. It has a threshing and malting floor, good dry storage and a grain dryer. We visited Orkney in the summer of 1996 to see Skara Brae, the stone circles and other neolithic sites. Our visit to this farm museum was a significant day in our understanding of traditional grain processing techniques - threshing, winnowing and making the malt to be brewed into ale.


The curator and custodian at the time of our visit 23 years ago was Harry Flett, a man with plenty of practical experience of farming, malting and brewing ale. He talked to us about the traditional way that grain, usually bere barley, was turned into malt. He explained how the grain barn worked. It gave us an insight into how the "first farmers" of the Neolithic could have processed the grain they grew.

It's not just about grinding grain into flour to make bread or boiling up some kind of gruel or porridge.

Grain can also be malted. This makes sugars.

Malt is the main ingredient for ale and beer. It's the source of sugars for an alcoholic fermentation. The brewer takes the malt, crushes it lightly, mixes it with hot water in the mash tun to make a sweet liquid, the wort. This can be fermented by the addition of some barm, the yeasty froth from the previous brew.

Harry Flett told us he would make some bere malt in the barn for us, so that we could brew a traditional Orkney beer. He was as good as his word. Some time later, back in Manchester, we received an 18 kg sack of malt from him, in the post. This was the last batch of malt to be made in the Corrigall grain barn. Graham used it to make an ale. He added a few ounces of dried meadowsweet flowers instead of hops. There was three times more draff or spent grain than you get from modern barley but only half the potential sugars. This is because bere is an older strain of barley It is much skinnier than the barley that is grown today.

threshing & winnowing
The earth and clay floor of the grain barn is ideal for threshing. A stone floor could break the flail or damage the grain. As this brief film shows, Working the flails requires skill, team work and care. The grain barn at Corrigall has two opposing doorways so that grain can be winnowed indoors in rainy or bad weather. That's what Harry Flett told us. Winnowing is the process that separates the grain from the chaff. The principle is simple. You throw the grain up into the air on a windy day. The fine chaff blows away. The grain falls to the ground.

Today the job of grain threshing and winnowing is done by the combine harvester. A traditional grain barn is no longer essential.

making the malt
Harry Flett told us that, traditionally, a sack of bere barley would have been left in a shallow stream for a few days. A convenient stream flows just behind the Corrigall Farm grain barn. Steeping is a very specific process. As the grain awakens from dormancy it needs oxygen as well as fresh water. A shallow, fast flowing, tumbling brook is perfect for steeping and aeration. We now understand the science. In the past, folk just knew what to do.

The clay floor of the barn is used for the malting process. When the grain has been steeped in the stream for 3 or 4 days, it is heaped onto the floor, where it can drain a little. It is gradually spread out, as it warms up, into a layer a few inches deep as germination progresses. Making the malt requires experienced, skill, knowledge, time and patience.

There are a historical accounts of how the malt was made. John Firth, in his book Reminiscences of an Orkney Parish (1920) writes that every farmer was his own maltster. The bere would lay on the floor for several days, by which time it had begun to germinate, or "show twa taes". This refers to the rootlet and shoot. Next the grain was rubbed or trampled to remove them and to prevent further growth. It was then piled into a 'sweet heap', covered with sacks and straw insulation and left for a few days. This seems to be a particularly Orcadian tradition of making the malt, and the effect is that the heap heats up and the enzymes in the green malt begin to digest the starches. This makes a very characteristic aroma, and a sweet liquor begins to ooze from the heap. What green malt is not used immediately is dried gently in the kiln so that it can be stored for future use.

Traditional malting involves mimicking the natural conditions in which grains grow. This is done by laying the steeped grain on a smooth, well maintained floor surface in a dark, well ventilated building, such as a barn, until the process of germination is visible. Then it is called 'malt' and it is dried, slowly and gently, in a grain drying kiln.

The kiln fire is not situated directly beneath the malt, rather it is set to one side. A flue takes the warm air to the bowl-shaped base of the kiln. The flue will hopefully lose any sparks on the way. The bowl has a ledge. A lattice of sticks is spread over this ledge and a central shaft, called a kiln lace. Straw is spread over this, and the damp green malt spread over that. It takes a long time for the malt to dry, and the fire must be tended with care. Towards the end, when the malt is dry the underlying wood and straw is very dry, and prone to ignition. If this occurs the kiln lace is withdrawn and the assembly falls to the bottom of the bowl, and hopefully extinguishes.

Many malt barns have been known to burn down.


The grain drying kiln at Corrigall is, perhaps, the best preserved on Orkney, but there are other traditional grain barns that are still standing.

We have only recently begun to understand the biochemistry of malting, mashing and fermentation. Maltsters and brewers have known the necessary techniques for thousands of years. Once known as the 'ubiquitous craft' there were maltsters in every town and village, and on large households and farms. Most farmers knew how to make their own malt and ale. With the advent of the Industrial Revolution and improved transport and communications, malting became more centralised and industrialised. For example, Thomas Fawcett & Sons Ltd of Chesterfield is built on the banks of the canal. The later railway is close by. Eventually small scale malting ceased except in remote rural communities. The grain barn at Kirbuster Farm Museum has buildings ranging from early Medieval to Victorian. The grain barn has lost its' roof, but the grain drying kiln seems to be mostly intact. The nearby clear, bubbling stream cannot seen on this photograph.

We can summarise the necessary features that a Grain Barn requires.

... it must be close to a reliable source of fresh, running water

... a dark, well ventilated building
... a smooth, regularly repaired, well maintained floor made of beaten earth or clay
... a way of drying the malt by gentle heating
... dry storage facilities
... people who have necessary skill and knowledge - a maltster


neolithic grain barns, malting floors and fires
The "first farmers" of the British Isles began to grow and process grain about 6000 years ago. They lived in circular houses, such as the ones that have recently been built at the Stonehenge Visitor Centre. They also built structures that archaeologists call 'rectangular timber buildings'. These vary in size, from the huge timber hall at Balbridie, Fife, Scotland, to much smaller structures, such as one dated to the early neolithic at the Braes of Ha'Breck, on the island of Wyre, Orkney.

These two buildings were involved in grain processing and storage. Thousands of carbonised grains of wheat and barley were found at both sites. Balbridie was completely burned down and Wyre was partly damaged by fire. The timber building at Wyre was re floored, re built and used again after the fire. Most of the early neolithic rectangular timber buildings in Ireland were destroyed by fire. Between fifty and sixty rectangular timber structures have so far been identified in Ireland. Carbonised grain, spikelets, glumes and other indications of grain processing activity have been found in many of these excavations.

Current archaeological theory suggests that these buildings were deliberately burned down as a kind of special memorial event for the community. It has even been interpreted as a 'ritual event', one that would have been spectacular and visible for miles around.

I suggest that it is far more likely that these buildings were destroyed or damaged by an accidental kiln fire, caused by the drying of the grain or the malt when it went very badly wrong.

Fires at Maltings have been a common event throughout the years, even in the 20th century. The photo below was taken in the 1990s and shows the kiln fire at the Maltings in Newark. 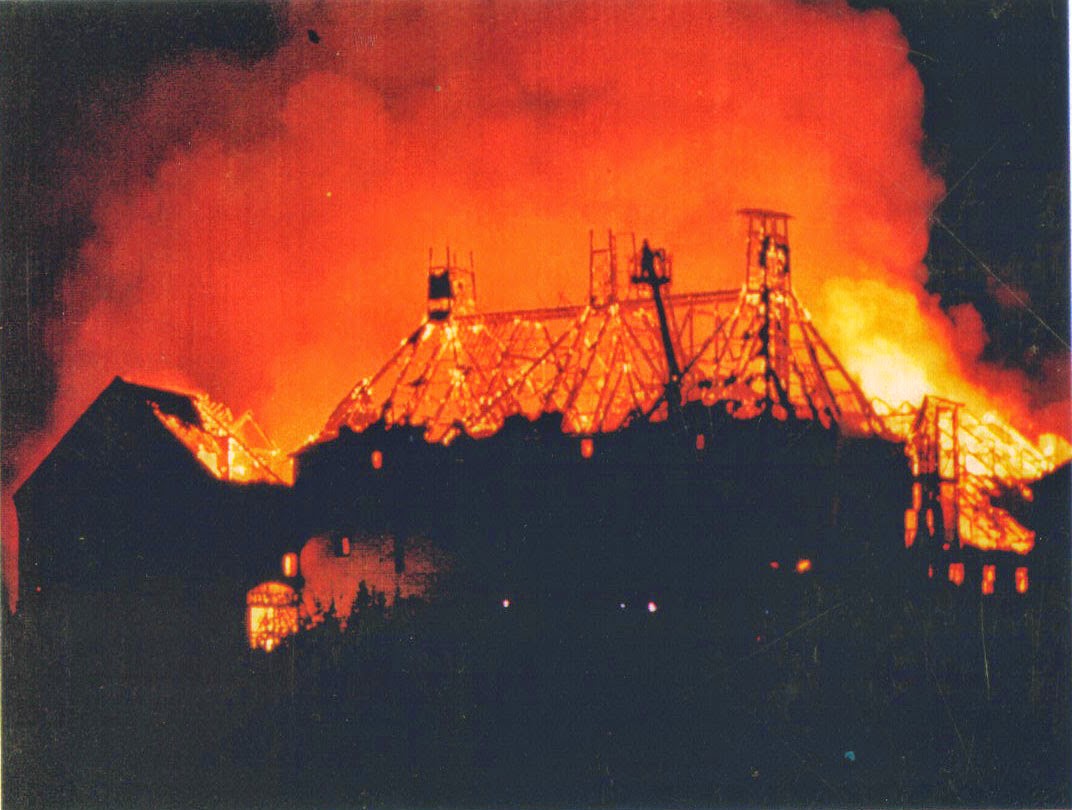 There are so many rectangular timber buildings of Neolithic date that have burned down that it is not practical to name them all. Here are some thoughts on a neolithic building that did not burn down.

Lough Gur, Co Limerick, Ireland, Building A
The Lough Gur excavations were published in the Proceedings of the Royal Irish Academy, Volume LIV, Section C, Number 2, 1951. I got special permission to access this volume from the stacks at John Rylands University Library, in the final months before the submission date for my Master's Thesis.

It was well worth it. This building is a very good candidate for a grain barn, with facilities for winnowing, a threshing area, a malting floor and evidence of a hearth, or grain drying area. The illustration below is from an, as yet, unpublished paper of mine. 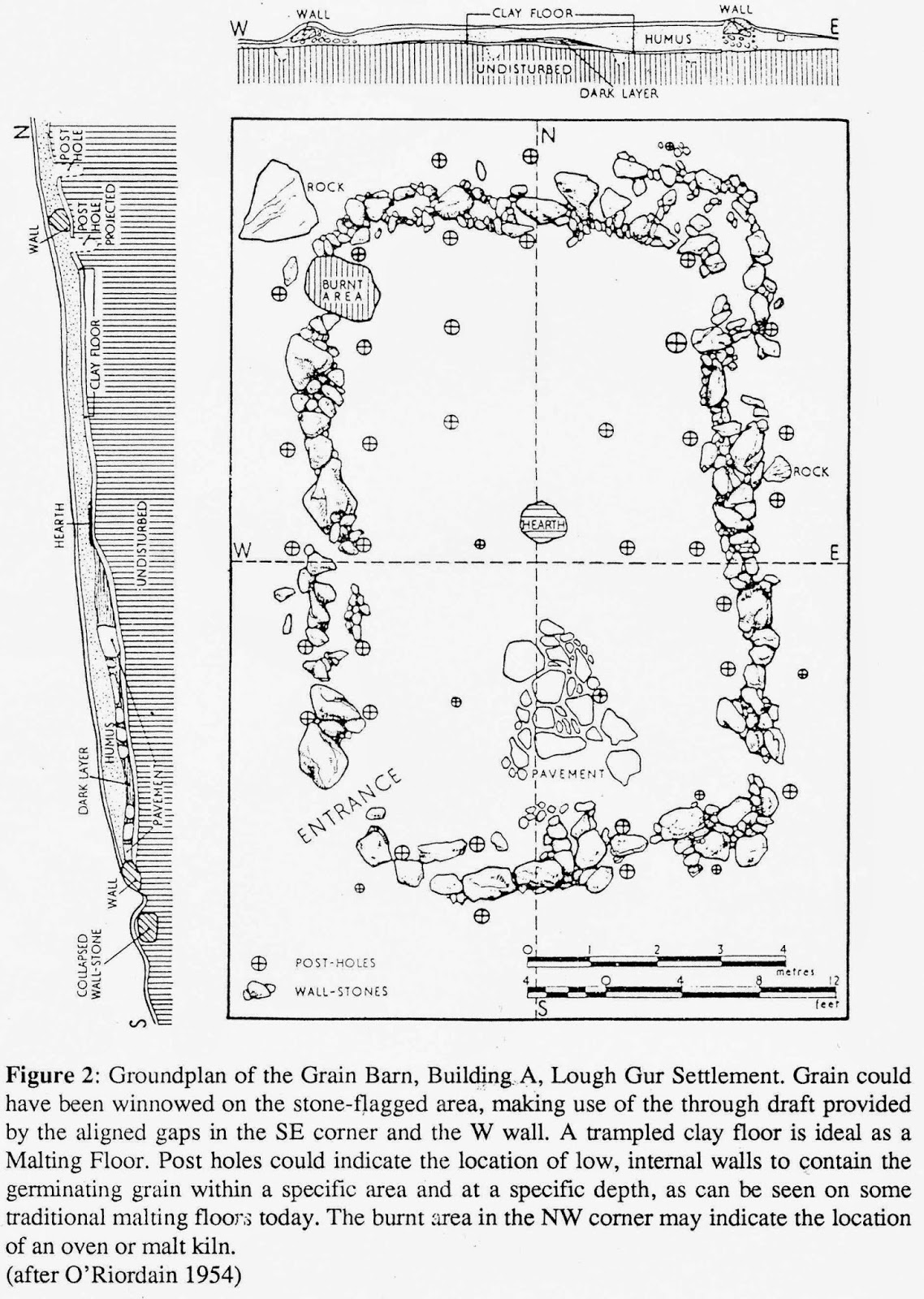 Not every neolithic building was a house.

Some of them were used as grain barns - something that would have been very useful for those grain processing 'first farmers' of Neolithic Britain.