This post is written by Graham Dineley, the brewer. The opinions, mistakes and misunderstandings are entirely my own, and I welcome corrections.

What is our research all about? Well the clue is in the Latin name for brewer's yeast "saccharomyces cerevisiae", a sugar fungus of beer. Only sugars can be fermented into alcohol, not starches. Cereals can be tricked into digesting themselves into malt sugars by malting and mashing. Malting is the careful and skilful controlled germination of the grains. Mashing is skilfully providing those malted grains with hot water so that their enzymes can complete the trick of saccharification, making sweet liquid wort. Anyone who talks about making ale or beer and does not mention those sugars is missing something crucial, the key ingredient. These malt sugars in themselves are very palatable and attractive and this is why the "first farmers" grew cereals. For the sugars. Once you have those malt sugars then alcoholic fermentation is an inevitable consequence and this also attractive.
https://merryn.dineley.com/2018/03/mashing-and-bit-on-fermentation.html
When this post was first started nearly five  years ago, I thought I knew a little bit about yeast. Then things happened that made me realise just how small that little really was. I picked it up again in March 2020, but never got around to publishing it yet again. Procrastination. So I must also update this prefix.

He also discovered the kveik yeast ring, which is the "magic spoon" on steroids. 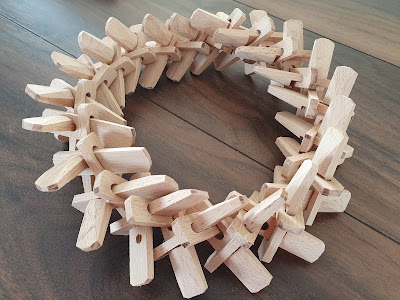 These can now be bought from my favourite "goods" supplier The Malt Miller.

Back then I had looked forward to working with kveik. It seemed to have the qualities of my once favourite bakers yeast.

I have now had the privilege of using two kveiks generously provided by Lars Marius: Espe #20 and Rivenes #2. I can confirm that Espe is a vigorous high temperature yeast that imbues the beer with a fruity plum like flavour. It was very tasty.

Also my favourite bakers yeast changed into a bread making yeast, and became unusable. It stubbornly refused to drop out, even after four weeks settling, the taste is still "muddy". It still does the same today and is no longer fit for my brewing purposes. I now use a commercial brewers packet yeast that has a wonderful coagulating and clumping action. 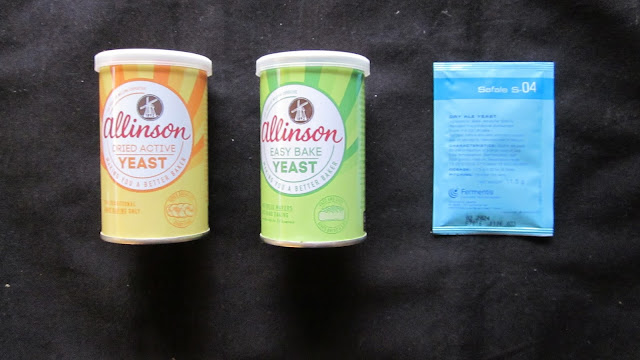 On the left is the baker's yeast, middle is bread makers yeast and right the commercial yeast. The bakers yeast changed before the packaging did. This confused me at the time.

I also looked into sourdough because so many people have said that it can be used for brewing. Mostly not, because it is a different fermentation mostly lactic, but some sour-doughs do contain Saccharomyces Cerevisiae. Sourdough is a whole other warren full of wonderful rabbit holes, if one has the time and curiosity to study it.


I am prompted to publish it now because of two recent experiments, where people have tried to recreate ancient brews and have relied upon the vagaries of "wild wind borne" yeasts. This "wind borne" yeast is an archaeological myth that will not die.

The first is the Dietrich's experiment to recreate a Gobekli Tepe brew. If you look closely you can see that their "beer" has a greenish tinge (page 17). Click on the link above to read their paper. It must have been made with sprouted grain.

I wonder whether they managed to make any malt sugars to ferment. I'm not so sure that they did. This is another archaeological myth, that malt is sprouted grain with green shoots. For a discussion of this see my blog, where there is a picture of archaeological malt from the Plant Cult workshop on Ancient Beer. Merryn was invited to present a paper at this meeting in February 2019, however, due to illness she was unable to attend. Fortunately, she has just published an article based upon this presentation. It is called 'The Ancient Magic of Malt' and you can read it online in the EXARC Journal here.

The second experiment is a Czech scientist brewing a 3000 year old "beer", using millet and potato? starch. What no malt? So no sugars! It must be a lactic fermentation and not lambic. Wild yeasts are notoriously unreliable. The beer was sour, like lemons. Chemist Lukáš Kučera from the University of Olomouc brewed the "beer". He says of his recreated brew:

“What makes this beer specific is that it needs to be fermented with wild yeast. You cannot buy this type of yeast in a shop. That's why I purposely fermented the beer in the vicinity of apples.

“The beer has a characteristic acidic flavour that will remind you of cider or wine, rather than beer. It has the colour of beer, it smells like cider and tastes a bit like lemon.”

I am beginning to suspect that the root cause here is that there is widespread confusion and misunderstanding about fermentation. That there is only one kind, and this would lie behind the idea that one can ferment anything. There are many kinds of fermentation, but the two most commonly encountered are lactic fermentation, e.g. sauerkraut, and alcoholic fermentation, turning sugars into alcohol, e.g. wine and beer.

Professor Keith Steinkraus has written a definitive book about fermentation and here is a good paper.

Apparently Saccharomyces Cerevisiae is a "killer" yeast, that is, it secretes toxins that inhibit the growth of other yeasts and bacteria. This is how it can predominate given favourable conditions. How it does this is fascinating.

How it replicates is even more interesting. It has two forms, haploid and diploid. Both forms normally replicate by mitosis, they bud daughter yeast cells. Under stress, e.g. drying, the haploid form normally dies, but the diploid form sporulates, that is it produces spores. These spores can then mate to provide new yeast cells and this gives it the chance to hybridise with other yeasts. This doesn't happen very often, but it can lead to new strains and varieties with different properties.

The spores can be wind and air borne on dust and insects. This became obvious to me in our last house in Manchester. After about 12 years of brewing and washing equipment there, any sweet juice drinks left out overnight by the kids in the summer months would be slightly fizzy by the morning, as did any yoghurt.

It was obvious to me that the yeast had established itself in the microbiome of the house, along with 130 years worth of other micro-organisms. This sort of thing must happen in every brewery, no matter how much attention is devoted to hygiene and sterility.

Recently I was listening to a radio interview about the archaeological discovery of the earliest physical evidence for beer in Britain, a fourth century BC site by the A14 near Oxford. Apparently examination of carbonised cereal residue found "micro structures of remains had changed through the fermentation process and air bubbles are typical of those formed in the boiling and mashing process of brewing". What!? This makes absolutely no sense to me, the processes are in the wrong order. Where did they get this from? Did it come from the academic literature, or did they just make it up, or perhaps both?

The beer writer said something like "It would have been a wild yeast. It would be wind borne, and so it would taste like this Belgian Lambic Beer".

I thought to myself, that is three naive assumptions in a row.

1) I would never trust the vagaries of the wind to get the right yeast. These people should know how to manage yeast if they were making beer regularly.
One thing learnt from our ancient brewing research is that if one uses "rustic" methods to make a wort, it is already heavily infected with all kinds of things, mostly various lactic bacteria. If one is making raw ale, that is unboiled ale, then one has to quickly overcome these infections with a vigorous ferment.

2) The Belgian Lambic beers are air inoculated, not wind inoculated, as is shown by the Cantillon brewery. When they refurbished their brewery with a new roof they found that the open wort would not ferment, like it used to. They had to put some of the old roof tiles back into the roof fabric to maintain the ferments, so the microbes are coming from the building and not the wind.

3) That particular Belgian flavour of beer is a local tradition and is not universal.

In the late 80s I was following an American e-mail brewing discussion list digest. I was surprised and intrigued by one post. A brewer had visited a Founding Fathers re-enactment settlement, and he spotted a hop plant. When he asked what it was for, the lady replied that it was to make hop-tea to capture the right yeast for making bread. This means that there was a pre-existing Saccharomyces Cerevisiae in North America, suitable for both baking and brewing before brewing had been established there. I have heard that this was a common practise in North America, particularly on the West Coast, until the advent of dried yeast, and the rail-roads.
Perhaps this was a close relative of S.C. Californiensis that is found in some sourdoughs.

It is an experiment I have often thought about, could I capture the right yeast here on Orkney with a hop tea.

In 1980 I was still living in shared accommodation and for convenience I was making beer from kits. At work we had a retirement celebration for some colleagues and one of the refreshments was a polypin of Pollard's Ale. Beer writers and bloggers Boak and Bailey have written a blog about Pollards.

Pollard's beer had a very distinctive, dry almost musty flavour, that was very popular. At the end of the celebration there were a few pints left with the lees ( sludge at the bottom). So I took it home and added it to a 5 gallon kit brew that had just finished primary fermentation. I expected it to settle out, but instead it took off with a very vigorous fermentation and a strong sulphurous aroma that lasted just over a day. The Pollard's was obviously metabolising something that the kit yeast had not. The resulting beer had that distinct Pollard flavour too. I have often wondered if that was a hybrid yeast. Pollard's ales did not last that long, despite being very popular. The story that I heard at the time of it's demise was that they had lost that unique yeast, and with no back up brewery to restore it, that was the end of Pollard's.

Saccharomyces Carlsburgensis has been said to be a hybrid of an Ale yeast and a Patagonian forest yeast, or even two forest yeasts. Another story I have heard is that it is a hybrid with a Mongolian desert yeast. I don't know, but here is a link to an early use of Saccharomyces Eubayanus:

One thing that intrigues me still is the Bronze Age practise of burying cremations in large ceramic "food vessels", because they are always found upside down. If these pots were used for fermentation, then it would make good sense to store them upside down when not in use. This would dry the yeast residues and protect them from dust, so that when reused these pots would spontaneously start a ferment. They would then be considered special, maybe even life giving, and this would make sense for a burial, a kind of sympathetic magic.